Posted on November 8, 2011 by mariner2mother

After having had our student teacher conference the other week, my little man is still having a tough time going to school. Some days are tougher than others; while once in a while, he actually goes off with only a whimper of, “I don’t want to go to school,” as he climbs into my car.

So, I wonder, what’s next? Then the idea strikes: I need to create a brief instruction manual for my son’s teacher. Little Man 101. It will explain him as much as I can, give specific directions as far as how to motivate him, and also give specifics as to what to not do (or he will shut down and turn all his anger and frustration inward). So, here goes.

I wanted to write this primer on my son because there were a few things that we discussed during the parent teacher conferences, that let me know that as much as you are figuring him out, there are still some gaps in your knowledge of him: why he does some things that he does, and ways to handle and motivate him.

First of all, I want you to know that I appreciate very much your teaching him. I appreciate what hard work it is to have to take on 26 developing little bodies with each of their personalities and different ways of learning.

My Little Man is very sensitive (empathetic, and compassionate). What I mean by that, is his emotional radar is always on high power. He picks up on what others around him are feeling. He is a built-in lie detector. A fellow student (or faculty) can say one thing, but mean something else, and he’ll get the feeling more than the words. Because of this, getting a break from the classroom every few hours is a necessity. It can be tiring and even overwhelming some days.

Little Man, as you know, has Sensory Processing Disorder. What this means in the classroom, is that his brain, when analogized to an engine, doesn’t always run up to speed. When one or more of his spark plugs aren’t sparking, he becomes dis-regulated. Things that help his regulation [ability to process his world and think well] are things that give him proprioceptive and vestibular input.

What is proprioception? It is one of our 7 senses that most people don’t know about. Proprioceptive receptors are located in the joints and ligaments, allowing for motor control and posture. The proprioceptive system tells the brain where the body is in relation to other objects and how to move. Those who are hyposensitive crave input; they love jumping, bumping and crashing activities, as well as deep pressure such as that provided by tight bear hugs.

That is why Little Man sits on a therapy ball; so he can move and bounce. When he is bouncing and moving a lot, it’s because he is needing more input in order to be able to think. So, instead of admonishing him to not bounce so much, send him on an errand to the office, or to the boy’s room and tell him to get a drink of water from the bubbler. Just getting out of the classroom and the simple act of walking, will help him greatly. If you can’t give him a break at that moment, let him know you’ll give him one as soon as you can- and that will let him know that relief is on the way.

What is vestibular? It is another of our 7 senses that most people don’t know about. The vestibular receptors, located in the inner ear; tell the brain where the body is in space by providing the information related to movement and head position. These are key elements of balance and coordination, among other things. Those with hyposensitivity are in constant motion; crave fast, spinning and/or intense movement, and love being tossed in the air and jumping on furniture and trampolines.

Our home is like a sensory gym for Little Man. He spins using our swing or an office chair. He lives to jump on trampolines, uses his hop ball and constantly jumps on our furniture. When he’s at school, the only time he gets vestibular input is at recess. Recess also gives him great proprioceptive input. THIS is why it is so very important for him to get as much recess as possible.

His sense of touch is hypersensitive- so having kids brushing or bumping up against him is a huge irritant. That is why sitting an area of low traffic is best for him: and I thank you for where you’ve got his desk. Every day when he gets home from school, the first thing he does is take off his shoes, socks, and pants. Every… single… day.

Having the school bell right outside the classroom door has added an extra challenge for him this year. With his hearing issues, going out the door just as the bell rings, is very painful to his ears, and sets up a response in him where every time he goes out the classroom door, he’s afraid the bell will ring. [When he was a very little guy, the security panels that stand at the entrance to every store door, became a nightmare for him. After being surprised by a store alarm, he wouldn’t walk into stores; I would have to carry him as he shivered in fear of the alarm going off. Even today, he hesitates going into stores, having to run past the security panels, in fear of the potential of the alarm sounding.]

When your senses perceive the world around you as something that is scary, and untrustworthy, it is very common to have anxiety. Little Man has a lot of anxiety at home regarding school. He fears that he’ll do something wrong and get in trouble and lose recess. He fears your disapproval. He fears being different from other kids, and they’ll laugh at him. He fears being embarrassed. He fears losing his therapy ball to sit on, because there are times when he really needs to bounce a lot.

How to Help & What Does Not Help

How do you recognize that his motor is running slow and he is heading toward dis-regulation? He is bored, can’t concentrate, is looking out the window and is daydreaming. If you catch him in this state, please don’t bring the class’ attention to him. When you know he has not been paying attention, don’t ask him a question about what you’ve just been teaching, knowing that he won’t know the answer (a common tactic when I was in school). This is humiliating. Just a firm squeeze of the shoulder or a tap on his desk will bring him back. Be aware that when he’s like this, it’s an indicator that his body and brain are not well-regulated. What he physically needs is a free pass to take a walk and let his brain get regulated.

Positive verbal feedback from you goes a long way with this child. It boosts his fragile ego quite a bit. [School makes him feel like a dummy- his words.]

Just be aware that if you have to admonish or discipline the class as a whole, Little Man will take it personally and will take it to heart.

And as previously mentioned, if  Little Man is bouncing on his therapy ball a bit, it’s because he physically needs to at that moment (or to do some other activity to help him regulate). You would never deny a diabetic child their insulin if they needed it. I see this as a very similar situation.

A child with Sensory Processing Disorder spends much more energy and effort just trying to keep it together throughout a school day. Having to sit, stay focused, write, pay attention with visual and auditory systems that aren‘t necessarily well-regulated, and actually learn and retain information is more difficult than for the average child. And most of this effort to appear “normal” will go unnoticed by the untrained and uneducated eye.

As the parent of such a child, I have to walk the fine line between pushing my child to do his work, and knowing when he’s dis-regulated and can‘t do any more. I have had to learn to recognize his behavior so I know if he’s being willful or if he’s overloaded and overwhelmed (for the uneducated, they can look the same). Since he was 2, Little Man has had speech therapy, occupational therapy, physical therapy, vision therapy and neurotherapy. He has come worlds from where he was as a toddler, and we will likely need to re-visit (private) physical therapy and vision therapy, because I see areas where he still needs more help. 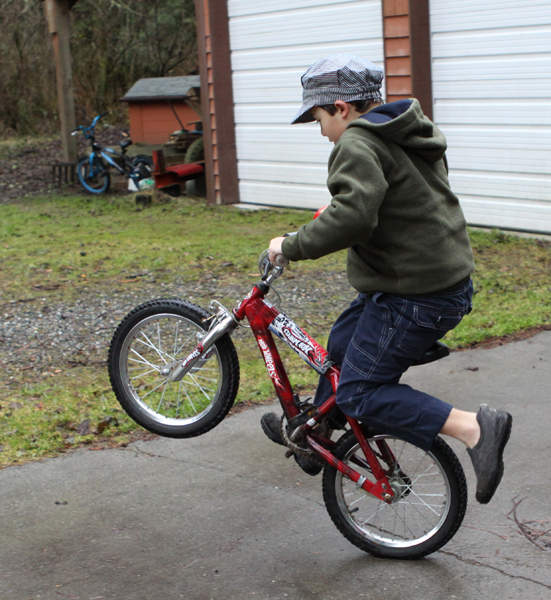 It's a balancing act.

Thank you for taking the time and effort that you give my son in school. I appreciate your kind, compassionate and respectful support of him.

I'm a mother of a creative 19 year old son, a former merchant ship's deck officer, and a wife. To feed my creative side I take photos. I am also Reiki attuned and am a student of Energy Healing, having used several healing modalities to work on myself and my family. My most recent adventure has me navigating a very challenging Kundalini Awakening.
View all posts by mariner2mother →
This entry was posted in Sensory Processing Disorder, The Voyage and tagged advocacy, coping with SPD, depression, intuition, school. Bookmark the permalink.