His Dysregulation Sent Me Running, Screaming

The title of this piece isn’t totally accurate. Although, in my mind, I definitely wanted to run away from Little Man. Sometimes, it doesn’t take a lot to get this kid out of whack. Living with Sensory Processing Disorder, keeping a regulated brain requires a lot of regularity, in the way of eating, sleeping, and activity.

I am a stickler with making sure Little Man gets to bed at a reasonable bedtime, every night. I don’t care if it’s a weekend or summer break. He does best when he goes to bed around 9pm. Yes, he doesn’t actually fall asleep until probably an hour later; but having that quiet, wind down time in bed helps him.

When he eats, I try to make sure he gets some protein in with his carbs, to keep his tank full and his blood sugar as even as possible. As a picky eater, his food vocabulary is very limited. And when his emotions are running high, he will not eat. At other times, he’ll have an appetite that won’t quit. Luckily, sugar doesn’t affect him the way it jacks some kids up.

This afternoon, after being sick with the bronchial crud from hell for about a week, I finally mustered up just enough energy to hit the grocery store. We were down to our last egg, and there would be nothing to spread on my toast, come breakfast time. Not only that, but the really crucial food that we were out of, was hay for our pet guinea pig. She requires hay all the time. Could she make it on compressed hay pellets? Probably. But when she wants something, she gets very vocal. And, I can’t resist the pleading big dark brown eyes, when she squeaks for hay or a treat. 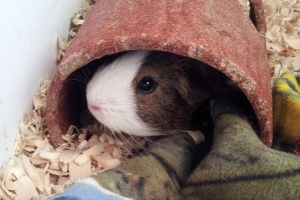 I can’t resist her cuteness.

I asked Little Man if he wanted to come with me. After having no success in finding a playmate for the day, Little Man was quite despondent. Even though it wasn’t his first choice of entertainment, he decided to accompany me shopping.

First stop:  the pet store for hay. Little Man wanted to look around at the fish tanks. Before long, he got it into his head that he had to have a tank on his desk in his bedroom. As I wheezed and coughed through the store, today was not the day to buy a complete fish tank setup. That started something in Little Man’s head. He began to obsess on having to have a fish tank today.

By the time we got to the grocery store, Little Man was being nicer than usual, and offering to do all the work getting the various groceries on my list and pushing the cart. He was trying to do energy work on me to help me feel better. It took a little while, but I finally figured out he was buttering me up, trying to get me to get him a fish tank today. 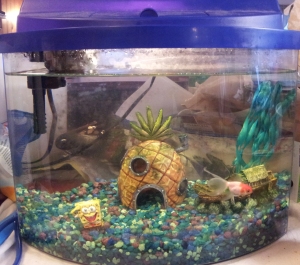 For the tenth time, I told him that we would get him a fish tank, but not today. I didn’t feel up to it. And in fact, cough, wheeze, gasping for breath, it was all I could do to get the groceries on my list.

So much for the helpful son. Meltdown began. Face crumbled. Hoped dashed upon the rocks. A whining sort of whimpering cry began, and kept on. The obsessing thoughts going round and round, like a hamster wheel. Not letting up. Nothing I could say, helped.

Got some food from the deli counter, hoping this would help. It didn’t. My mind races: think, think, think. What’s gotten this kid so out of whack? Yes, he takes disappointments much harder than most kids. But this was up a notch, even for him. Dysregulation. What was it? Crap! I figured it out. He went to bed almost an hour and a half later than usual. Someone other than Mom put him to bed, allowing tired and coughing Mom to go to bed early. Thanks for nothing.

I don’t know about other children because this is the only one I have. But I have heard some people say they put their kids to bed late so they’ll sleep in. When Little Man was a toddler, if he got to bed too late, he’d have a night terror, guaranteed. Now, all it does is leave him dysregulated the entire next day.

So there we were, half my shopping list to go, Little Man having a somewhat controlled meltdown. I say controlled only because he wasn’t lying on the floor kicking and screaming, and he wasn’t yelling and screaming. But he was barely on the edge of totally losing it. In one moment, I feel so badly for this kid, whose brain messes with him. And in the next, I’m so tired, frustrated and ticked off, wanting to just finish my shopping in peace, cough, wheeze, hack. On the edge of self-control myself, wanting to run away, screaming.

But I know this too shall pass. And it did, eventually. It took getting through the rest of shopping, the entire 25 minute ride home, and carrying the groceries into the house. At home, away from all the people, Little Man could decompress and disengage the hamster wheel. Does it take a toll? Less than it used to. Do we have to deal with this sort of stuff often? Often enough, but less than we used to. It’s life. It’s our life.

I'm a mother of a creative 18 year old son, a former merchant ship's deck officer, and a wife. To feed my creative side I take photos. I am also Reiki attuned and am a student of Energy Healing, having used several healing modalities to work on myself and my family. My most recent adventure has me navigating a very challenging Kundalini Awakening.
View all posts by mariner2mother →
This entry was posted in Sensory Processing Disorder, The Voyage and tagged coping with SPD, dysregulation, light at the end of the tunnel, sensory processing disorder (SPD), struggles. Bookmark the permalink.

5 Responses to His Dysregulation Sent Me Running, Screaming