When you navigate a boat or ship through the water, there are a few things you do not want to do. Running up on rocks and getting caught in a whirlpool are two of the biggies.

Everyone comes across whirlpools and rock ledges in their lives. If you’re lucky, the ledge is marked by a lighthouse, and your lookout has sighted the whirlpool before it’s swirls have a death-grip on your hull.

But once in a while, there is an unmarked, undiscovered ledge that doesn’t have a lighted beacon yet, and your lookout is asleep at the wheel.

So how do you handle these situations?

Over the years, I’ve handled them in different ways, from pretending the rocks aren’t there (let me tell you, that one doesn’t end well), to bumping into them and being able to get a tow off (with minimal hull damage), to listening to my intuition screaming at me, “Hard to starboard!”

Over three months ago, our voyage was interrupted by one giant whirlpool that my lookout never saw coming. In one day, the entire ship was caught in the swirl, being pulled under, and my son started to drown.

He was caught by the never-ending swirl of severe anxiety and panic attacks. 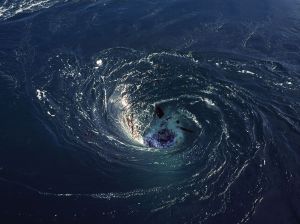 All hands manned emergency stations as I called out for aide. One by one, rescue vessels threw us tow lines, but the strength of the whirlpool was almost too much. For the past few months, we’ve been holding on, trying to not go down with the ship.

A few weeks ago, another vessel arrived and threw on another line. It looks like this one might have made the difference.

The swirling and whirling is beginning to slacken off a bit. But we are diligent to keep a sharp lookout for cracks in the hull. One crack letting too much water in, and the pumps might not be able to stay ahead of the influx of water. So far, any cracks have been minor, and we’ve been able to get most of them sealed up.

How have we made it this far? By taking stock of the situation when it arose, taking decisive steps, and holding fast to the knowledge that whirlpools are temporary. They eventually lose their centrifugal force and slack off.

Along the way, there have been moments where the ship’s captain and crew had their faith tested. Their faith in the assist vessels and faith that the whirlpool would eventually dissipate.

It looks like we’re beginning to come out the other side. Finally.

Looking at hard times in life as battles is never the way, because when you push against something and fight it, it only pushes back. Instead, I’ve learned to see them as voyages to traverse; some easier and others longer. Some are rocky or want to suck you down, while others are mere bumps in the road.

The last several months have been a lesson in anxiety and depression that I never saw coming. I never imagined my son would be crippled and held hostage by his brain. The thought of my son being decimated by mental illness kills me. Absolutely kills me.

One thing I had faith in from the beginning was that as long as I kept asking the Universe to send help, I would find it. And it arrived in the form of a wonderful intuitive naturopath and a homeschooling teacher who is guiding us.

In working with the doctor, making dietary changes and adding some supplements, Little Man’s body and brain are healing. He might need some help to feel ok for a while, and that’s just fine by me.

Looks like we’re beginning to emerge from the whirlpool. And for a while, at least, we’ll keep a tow line or two on for safety. Fair winds and following seas to all of you.

I'm a mother of a creative 18 year old son, and a former merchant ship's deck officer. To feed my creative side I take photos. I am also Reiki attuned and am a student of Energy Healing, having used several healing modalities to work on myself and my family. Our most recent adventure has me homeschooling my teenager and going through a very challenging spontaneous Kundalini Awakening.
View all posts by mariner2mother →
This entry was posted in Holistic Healing, Mental Health, Spirituality, The Voyage and tagged crippling anxiety and depression, keeping the faith, navigating through rough times. Bookmark the permalink.

14 Responses to Navigating Whirlpools and Ledges